Of all the questions  that are asked  about reloading , I would have to say that the most frequently asked is " What are the start-up costs. The simplest answer to this question is "I don't know". The reason I say this is that there are a number of reasons why one would want to reload shotgun shells. Would it be for target shooting ,remember there are quite a few manufacturers,mass producing shells for this purpose,some are the "EL CHEAPOS" which are adequate,to a point, and if you only intend to take a few shots every now and then perhaps that is the best way to go.Then,  there are those that are top of the line such as "WIN. AA" and "FED GOLD MEDAL", for those who are more serious,and for those who might have competion shooting in mind.With those shells , however , the shooter must fit the shell instead of the other way around.
Hand loaders have the option of choosing between a multitude of the finest reloads that can be fired through a shotgun " ANY GAUGE", including the .410 bore. These loads can be tailored to fit the shooters style, and the gun you are using, since it is you who will be loading them.Does this mean that you have to go out ond buy up all the available wads and other components on the market to get the " few" that you will need, "certainly not". the first step is to purchase a quality "RELOADING MANUAL" such as "ADVANTAGES IV" ,which is one of several that I use, from BPI.[ Ballistic Products Inc.] .This manual has since  been  revised and is now " ADVANTAGES V ". Manuals such as this one , and many others ,will teach you the basic techniques of reloading and walk you through the processes in great detail. It is in this way that you " The potential reloader" will be able to make informed decisions and thereby determine what your costs will be. BPI. has a number of specialized publications on all forms of target and hunting reloading and in my opinion these informed decisions are the most cost effective. Don't forget to factor in the pleasure you will get from knowing that it is loads that you have put together on your own reloading bench that are now breaking targets or taking  game, " THAT'S PRICELESS ".

I didn't know if anyone on the site would be interested in reloading steel, or other forms of non toxic shot, for waterfowl, but I thought I would mention it anyway.
As most know by now I am into loading steel for ducks and geese, and since there are so many high priced loads out there that are producing more headaches from recoil than game, it just may be,that reloading is the solution to the problem,I know it certainly was for me.Again as I mentioned above the first step should be a " Reloading Manual " I can't stress this enough, knowing what you are doing is very important and " EXPERT INSTRUCTION " is the best and safest,not to mention the most cost efective way to go about it.
I am using " ADVANTAGES IV " NOW "V", this manual in addition to what I mentioned above has sections on reloading,not only LEAD, but also, STEEL, BISMUTH and HEVI-SHOT and gives insight into shotshell ballistics that will indeed help in deciding what you want in a shell. The " STATUS OF STEEL TWELFTH EDITION " by " BPI" is another reloading manual that I also use, in addition to, " STEEL RELOADING HANDBOOK" from RSI. [ Reloading specialties Inc.]. These two manuals deal, specifically,with steel shot and the " RSI " manual has some "HYPER SONIC"  recipes in it and the materials you would need to reproduce them. Once again the manual comes first. Below is a list of approximate costs.

The loaders that I use are two VERSA MEC 700'S, both ends of the picture, which are now discontinued , but are similar to the MEC 600 Jr.MARK 5 which is in the middle . These are single stage loaders and can be ordered with dyes for all gauges including .410 bore . They are the best to begin with and also are better for non-toxic shot because the shells can be removed at any station so that things such as wads, filler wads,buffer, overshot cards "ACCORDING TO THE RECIPE" can be added. they are app. $200.00 plus shipping.I use a scales and weigh all charges both shot and powder so I don't have to worry about charge bars or powder bushings.It is recommended to purchase a scales with a 1000 grain capacity so that the finished shell can be weighted. These range from app. $150.00 and up, however they are well worth the cost.Then there are,

The two most expensive items are the reloader and scales,but as you load and fire your own handloaded shells  the cost goes down due to savings on manufactured ammo and Aspirin .
I've been doing some digging in the past couple of days and found out that "Coastal Marine" is in the process of stocking reloading materials,and after speaking with Jamie Quilty , manager of Coastal he has confirmed this, and are awaiting a shipment of reloading materials which they hope to have by the middle or end of March. That is great news for handloaders,and those who would like to begin reloading , Handloaders,because it will be a dependable outlet where they can order reloading materials and receive them in a reasonable time period, that is if they are not already in stock,and beginners because it will take the guesswork out of start-up costs.Reloading is not that complicated,even I can do it.
I posted a picture on my home page that when clicked, will bring  the components I am using  on the bench up close,if anyone has any questions as to what they may be, feel free to ask.

There are a number of people who have heard the hype from shot shell manufactures concerning magnum loads of steel shot, unfortunately, they don't bother to tell you that their definition of a magnum load is a shovel full of slow moving shot and even go so far as to offer it in small shot sizes such as #4. The problem with these loads is that in close where they may have sufficient energy " PER LOAD " TO KILL a duck the massive number of pellets destroy the game, and out at 20 + yards they do not have the energy " Per Pellet " to kill and so cripple them. And as you unload the next two shells at them as they flutter away you can't finish them off.Oh,well I guess the coyotes, foxes, and other scavengers have to eat too, but I personally would prefer to be eating them myself. Below is a couple of photos to try to help put load comparisons into perspective. Just in case it's hard to make out the writing on the picture the first load is a 1 1/4 OZ. load of # 2 lead compared to a 7/8 OZ. of steel#2. The lead load contains 113 pellets while the steel load contains 112. The second load contains a 1 3/8 OZ. load of BB lead shot as compared to a one [1 OZ ]load of steel BB. The lead load contains 72 pellets and the steel contains 70. As the pics show , these steel loads even thought they appear to be light, they are "Power House" loads and are the real magnum loads.I know because those are the loads I use and have described on this site. I hope this will help to put things in perspective and help in choosing shells. when I see a manufacturer saying that there 1 3/8 OZ. loads have a muzzle velocity of 1550+ fps. I have to say prove it. Alliant powder developed a special powder for steel shot called " Steel", it is the slowest shot shell powder made , even slower than " Blue Dot", another Alliant Powder. They can make the boast but the physics involved don't bear it out. 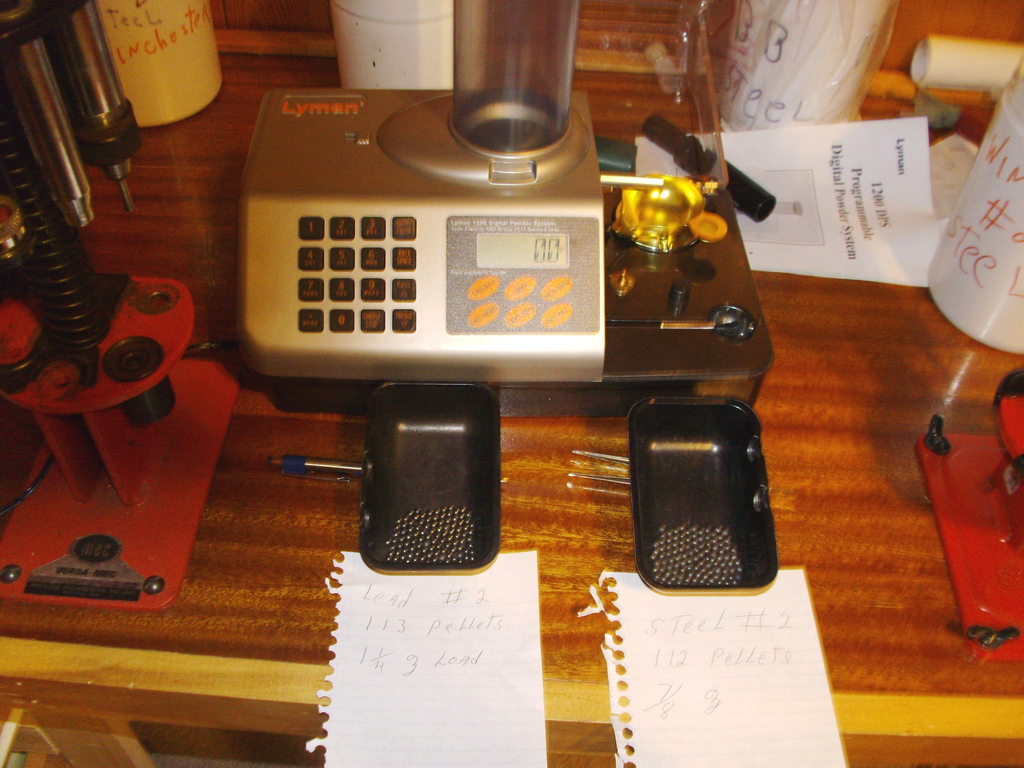 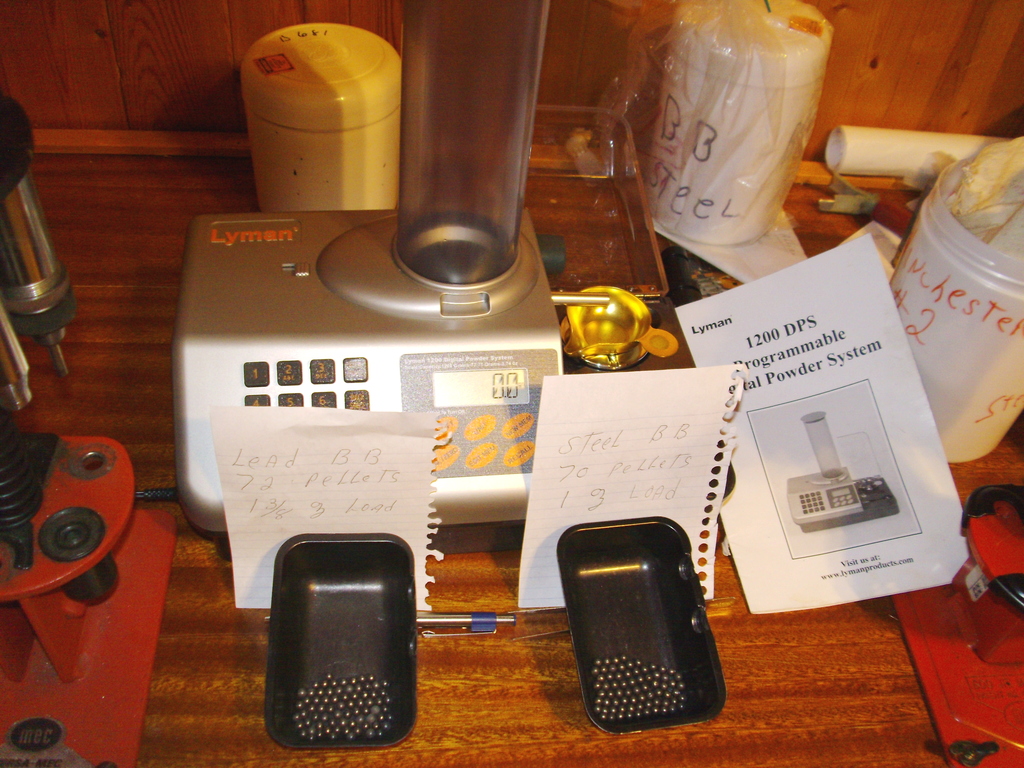 Just wondering if anyone on site is reloading shotgun shells for waterfowl.