Hi,Anyone know any areas around the north-east Avalon where you can go goose and duck hunting without the use of a boat? I'm new to the Avalon area and to goose/duck hunting so I'm looking for any…Continue

Hi, anyone on the west coast want to go goose hunting but don't have any gear. I got 20 FB decoys, 38 shells,a bunch of goose floaters & lots of duck decoys. Got goose flag, calls, 1 layout…Continue

When I first crept on those geese there were 8 of them there, along with three black ducks,piece a cake. Problem was they were on one side and I was on the other. Luckily, the wind was in my favor,…Continue

You need to be a member of Goose Hunting to add comments!

Hey guys if any one is

looking for a hunting partner to go duck hunting with...I have all my own equipment (decoys,guns,blind) I'm just not sure where to go ,lam from the St.John's area with a vehicle of my own. If none is interested please let me know.

Seen some in around the thousand acre marsh.

What's the word on geese? Anyone getting any or seeing them? I haven't seen the one in my last 2 trips!

The best thing is to try google earth and have a look through that. The thousand acre marsh is a good spot for ducks and geese.

Comment by marvin parsons on December 7, 2011 at 8:26pm
Hi all I am new to stjohns and I love geese hunting and duck hunter can anyone tell me some spot where I could go close to stjohns

The hunt started on Friday the day before I got a shot as I glassed over one of my hot spots , I saw a couple of geese swim out from the shade of the trees, this started the heart pounding because I have not seen a goose in the whole area during hunting season since 2009. I was on my quad at the time and so I headed after them, but by the time I got there they had already left. They don't stay long after daylight , but head out to feeding areas. I was not interested in ducks so after trying one more body of water on the way I headed back home without making the full round.

I figured that since they had spent the night there they  might come back again that evening, since I don't like firing  at them late in the evening when they usually arrive and sometimes after dark , it would have to be Sat. morning and I would get there early .

Next morning with horizontal rain and heavy wind I put on the oil coat and my cut off  oil pants and headed back . This time I left the bike in the truck and walked to the pond. I looked at the watch on the way and it said 6:35 AM. legal shooting time was 5 min. old, and I thought to myself if I were there now I  would not be able to see them , it was a very dark morning. For some unknown reason I decided that I would not wear my glasses because I always have trouble keeping them clear in wet weather.

There are two arms in the pond one we'll call south the other north the wind was south taking my sent across the north arm and into the woods, the geese ,if they were there, would be in the south arm close to its north side  with only a small strip of woods between the two arms. I was approaching from the north arm with only the trees between me and them.

As I got close to where they would be I crept up the hill that separated the two arms to take a look. I could see the rocks that they should be on but could not make out if there were geese on them, so out came the bin. and I had a look, heart pounding again , they were there but I still had a ways to go.

Just a little farther on there is an opening where you can see across between the two arms with no trees just grass and some goolbeery  If there was a goose out in the pond he would spot me ,To bad for the geese it was more cover  than I needed.   I crawled through the grass and water until  I got past the opening and into the trees.As I moved slowly along the little ridge I saw one goose moving as I looked out through the trees, they were right out in front of me. I crawled out behind a tree and got ready for the shot . I just got my water soaked gloves off and poked the barrel of the gun out between the limbs when they started to leave the rocks and swim out into the pond, they usually do that and then take off , if they are not intended to feed, this group however, don't stay to feed  and since I am familiar with them I knew I had no choice but to fire.

I opened up two quick shots at two different geese resulted in one dead and one wounded a third shot at one on the wing, but I must have missed.

They headed west right up the long arm and into the wild blue yonder to the right side of the tree I was behind, and I jumped out from the left to deal with the wounded bird I didn't  see them flying away.

The wounded goose began to swim strait toward me and when he got about 30 ft. away he saw me and started to swim toward the other side. the gun was empty so I dropped in a load of # 3 my duck load and at a distance of about 50 ft. fired at his head with this powerful load, as I pulled the trigger I thought " dead goose " and his mine.  Not so fast buddy, I watched in amazement as the tight pattern hit the water out in front of him " too high" I thought, in with another and fired again same thing as he was getting farther out the opposite  shore was becoming his backdrop and making him harder to see, and so the third shell  I aimed lower and this time you would think I had him no siree right over his head again .  Either of those  three loads would have killed him if I had hit him ,so I put in a load of B.B shot and fired again and this time I though I saw him get hit but a goose swimming away from you at 60 or more yds. is very hard to kill for several different reasons.

HOLD ON THERE NOW, remember I wasn't wearing my specks , anyway he got to the other side,and I took note of where he landed.

After a few choice words , which I am ashamed to write here I decided to put my trouting pole together and retrieve the dead goose on the water the wind was taking him down the pond to the east and south east , It had changed in that short a time, I  would have to go around the pond and hopefully. find the other.

I retrieved the dead goose and headed down the south arm and when I got to the end of it I tied the goose up in a tree, coyotes you know. I have to say with that goose and a very good chance that I would find the other because I didn't see him head toward the run out , they quite often head to the river and go downstream , I felt pretty good.  I then walked around the end of the arm and up the other side and before I had gone too far there was a huge goose stone dead on the grass and moss right in front of me. My first thought was that maybe  the injured bird made it up there and that was him, but that bird was a long ways down from there and I was watching to see if he moved and I didn't think he could have gotten up that far without me seeing him , but I wasn't sure so I picked up the goose and laid him in by the trees,  and headed down the shore to find the other, he was a big bird.

As I was walking I was paying particular attention to the grass at the waters edge and farther back toward the woods to make sure I didn't miss him. When I got close to where he went ashore he jumped off the bank and swam out in the pond, "so here we go again" ,the gun was loaded with #3 shot I took aim at his head as I had done before and fired at about 20yds . I killed him stone dead . You see this time I had my specks on.

To sum it up if I had been wearing my glasses that injured goose would never have survived that first finishing shot and I would not have had any reason to go around that pond and would never have found that big goose . I 've never had that happen before.  Their weights were  two at 9lbs. and the big on at just over 11.5lbs.

The one on the left is the one I didn't shoot , or at least didn't know I had shot. 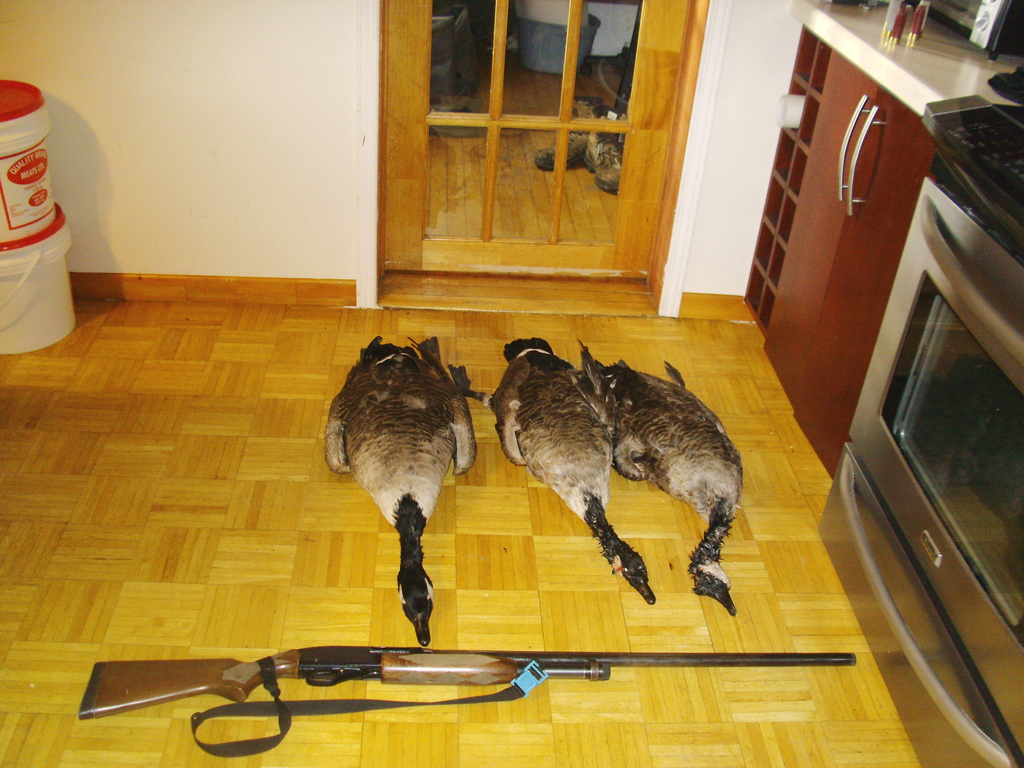 Comment by Nicholas Hickey on September 22, 2011 at 11:05pm
Hey blake , seen a few before the season opend now i havent seen the one so far must have moved on with the frost, just waiting until saturday  so i can see if i can find a few somewere

Comment by kenneth Griffiths on September 20, 2011 at 10:16pm
I see i good few on the highway today hope to get there on sat.